This was the question asked by the late critic Leo Benesa back in 1979 in an essay published in the Philippine Tribune. What is there to ask? One might counter—possibly a stauncher appraisal by succeeding generations of artists and enthusiasts who are well-versed in the apparent cosmopolitanism of the contemporary. Could the mixed-pot, in its several stages of percolation, be the actual essence of Philippine art? Could the wide spectrum of colonial influences, between past and present, serve as the only and true color of its Filipino-ness. It is sensible to conclude, as well as convenient, given the evidence. What gets lost in all of this though—this premium in multiplicity—is the preeminent question itself: is there a common theme amongst new works of Philippine Art? When we cease to ask, we forego possibilities. Productions for art’s sake and our quest for their meaning may soon become out of reach.

Presented here in the form of a gallery exhibition is strictly not an attempt to ask but to venture in remodeling the question: what do Filipino artists see, that may as a result, announce a motif? The question becomes a query in visuality—in imagining that while we may not be coming from the same artistic concerns, we still are, after all, looking at the same field, borne out of a common existence. This visuality—as a testament to what is seen—has the capacity to transform images into worlds. They are the products of what were visible and what were interpreted. And interpretations may translate to what essentially was felt. It becomes an argument therefore on the subject’s identity rooted in the bias: the way I see it. And this bias becomes a possible source of art’s Filipino-ness.

This bias turns into worlds, these worlds turn into their own ecosystems, especially if they reappear time and again due to constant explorations. There are Filipino artists, more than a handful, who maintain these explorations, offering a possible sampling of which worlds have coincided with our worlds—the common bystander. To build worlds, one must build systems. And these systems are formulated by the artist while trying to make sense of the world that was made visible to her. The landscape of Philippine art has experienced several significant shifts since the 70’s, especially in painting, where its evolutions, whenever confined within the frame, can serve as locus to more thematic observations. One of the more long standing subjects of concern in Filipino image-making is how effectively, (and how accurately) should they convey the Filipino condition? And all these attempts are especially evident during most artists’ active involvement in groups associated with Social Realism whose influence is sustained throughout many of the styles that we encounter until today. But we have also witnessed the significant break from that tradition, mainly during the 90’s, in which more artists have begun to explore and have attempted to find other clues to the Filipino condition outside the usual supply of images—outside the merely visible and real.

With the works of these selected artists, we may find certain clues as to how artists build their worlds. And these worlds, instead of merely channeling different styles and influences, are fundamentally systems that have been borne out of different concerns: cathartic, psychological, social, colonial, mythological, environmental, and on sexuality. The whole spectrum is not a source for images but acts as a filter for possible images. This is where a common ecology might develop, a common bio-system, an enduring character.

Consider among the artists, the way Kawayan de Guia and Allan Balisi transmit their worlds through the visuality of other types of media like in print or film, appropriating these two mediums’ aesthetic in order to generate their own. On the other hand, artists like Jayson Cortez and Lynyrd Paras have made these other media their subjects instead in their paintings—the impact of the digital and the virtual to our psyche, to our way of perceiving things. Furthermore, there are artists like Tekla Tamoria x Nomina Nuda and Miguel Lorenzo Uy, who have embraced the digital as a container for their messages—and these bring us back to the imagined and built world—of parts working organically to produce unique environs, which in Rodel Tapaya’s case revert back to the folkloric and mythological, while in Renz Baluyot become the objectified and the material—a part of actuality. And then there are works by Tanya Villanueva and the collaboration between Natu Xantino and Renz Botero based on their Diwata series, which circumnavigate the whole concept for the show—in asking, where can the Filipino identity be found if not from the everyday, the domestic, the laboring, the fantastic, the queer, and the imagined?—not as proofs for a chaotic melting pot of tastes, but as testament to the complex and layered, visceral source of identities.

As we turn to these artists, who in their search for both the new and familiar, we can see how they have made and remade worlds— time and again, until they find their own cunning bio-systems, their own visual terrain, their own imagery, and their own renditions of ‘man and his environment.’ This topic—of man and his environment, could have never been more integral to the conditions we are about to face. But then, there are no simple propositions, and these artists become instrumental, once again, in reminding us how returning to the world, and re-establishing our relationship with our surroundings—whether socially or ecologically, are far more complicated than a simple portrayal of a fixed and narrow view. 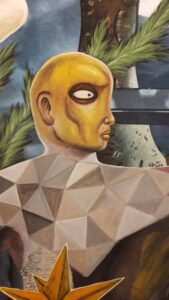